November 9, 2015 deyb Comments Off on Smart Home News with ThomsonAdsett

The answer is a lot, says ThomsonAdsett’s Group Chairman David Lane, as Australia is tracking global trends in the healthcare sector and can expect to see a decrease in government spending on public healthcare and a push towards a more home-centric and technology-based healthcare service.

Lane believes these trends will affect building design not only at the point of rethinking the design of the traditional healthcare institution, but it will also see residential design begin to encompass new smart technologies, such as those offered by their seminar partners Borderless Healthcare Group.

“Most governments running public hospitals don’t have the money to continue the current rate of spending, particularly with our ageing population that has been slated to gridlock the system in the future,” says Lane.

“There is an evolution occurring. Governments are moving from hospital models into home-centric models, shifting from paternalistic public healthcare to a personalisation of healthcare, and this will see occupant healthcare, lifestyle and recreation become integrated within the building fabric.”

SOFTWARE DEVELOPMENT AND AN INSIDE-OUT APPROACH

According to Lane, this shift has been in the works for many years now and is centred on the encouragement of preventative lifestyle choices rather than prescriptive (and publicly funded) care. But the uptake of this healthcare model will be quickened, he says, by the improvement in information sharing and smart technology.

“What’s been missing is the software that allows more seamless and integrated healthcare services to be available to the consumer at home,” says Lane.

“These systems are now moving more towards a more consumer directed care and we as the customer will have more control over our health services. It will focus on preventative measures from within the home.”

One such example given by BHG and ThomsonAdsett is the further development of smart kitchen technology to customise recipes to suit residents’ specific health requirements by measuring their blood pressure and other biological data. 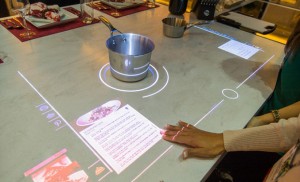 Appliance company Whirlpool, which has an office in Victoria, demonstrated the use of an interactive, voice-controlled touchscreen cooktop that can display recipes, Twitter and Facebook updates and news. Lane predicts this will be developed to consider personalised information based on healthcare needs. Image: Tech On Show.

Another product they’ve earmarked for uptake in the Australian consumer market is the ‘Smart Bed’ which has the ability to sense one’s blood pressure and heart rate and supply that information to high-tech caregivers and telemedicine services. 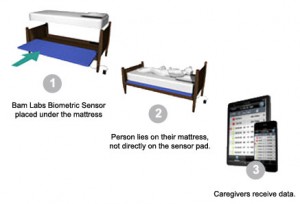 “Smart beds” have evolved from simple electronically operated hospital beds that were more about the bed and its capabilities than the patient to a touch-free, intelligent and cloud connected monitoring platform that empowers healthcare providers with valuable but hard to obtain biometric information that helps them improve patient care. Lane believes this technology could become adopted by the consumer market. Image: Goodmark Medical.

Dr Wei Siang Yu from BHG goes so far as to call smart technology the solution to the problems facing an ageing Australian population.

“Having a smart home and smart health will be a solution to this ageing population,” he says.

“If we actually look at the construct of the home with the advent of all this technology and the  internet of things, then the home actually becomes a very important space for consumers to have  greater control over their lifestyle choices.

“The home will transform into an app. store with on-demand services from fitness to wellness and from healthcare to quality food service.”

Lane calls this the ‘inside-out’ revolution:

“The ‘inside-out’ revolution – from ‘home built for you’ to ‘home personalised for you’ – will open up new perspectives in city planning, space utilisation, real estate product design and even financial modelling of the developer’s business.” 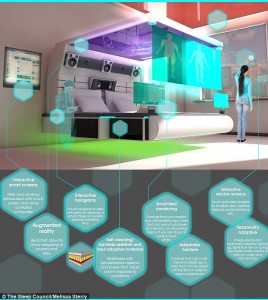 This image, created by London-based design scientist Melissa Sterry, predicts what a bedroom of the future might look like. It features beds that monitor health and bedsheets that respond to changes in temperature. Image: The Slee Council/Melissa Sterry.

Both Lane and Dr Wei Siang Yu from BHG admit the price and nature of this technology means it is geared for the higher-end consumer market and won’t be affordable to all at-first. But they insist that some Australian developers have already expressed interest in the ancillary income prospects that this technology offers, and that we could see it included in affordable multi-residential complexes in the not too distant future.

“A lot of developers are looking for points of difference and these products provide it,” says Lane. “They offer their buyers a suite of online tools that can manage your health, recreation and lifestyle requirement.”

According to Lane they could also provide developers with an online recurrent income stream so instead of just relying on capital expenditure and the sale of the development for income they become an engaged party and get continuous income from it following construction. 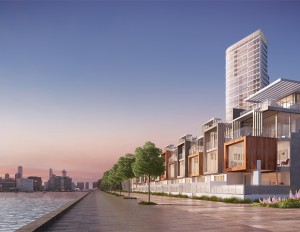 Developers such as Mirvac could embed the costs of this technology in their bricks and mortar service in the future in order to provide a point of difference in the property market. Image: Wharfside Residences, Victoria by Mirvac.

Siang Yu agrees and says that in China developers offer the technology in their bricks and mortar service because they recover their investment in the first two years by selling software add-ons to the occupant.

“These are affordable technologies that can be built-in in terms of cost with the developer and delivered as their bricks and mortar service.

“Developers will use it as a unique selling point and will usually absorb the cost in the first two-years and from there use it as a service-on-demand—homeowners can upgrade and pay for what they want from the developer.”

There will also be occupant incentives, predicts Siang Yu, to take on this preventative healthcare initiatives.

“What we’ve seen is that if you use this technology, for example to measure blood pressure every week at home, your insurance premiums will be lower,” says Siang Yu.

“The government may even give you savings on your property tax, because if these things save the government money, they wouldn’t mind giving you discounts on tax.”